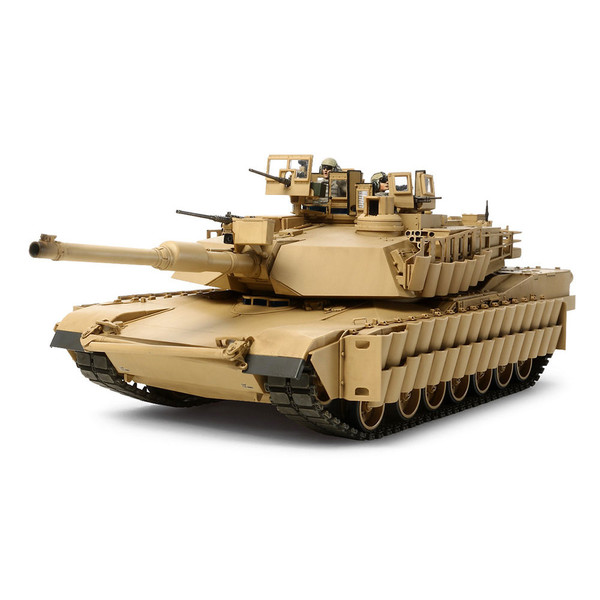 Made for the Streets
During the Iraq War of 2003 and the subsequent occupation, the M1 Abrams served as the main tank of the US military. While the M1A2 SEP was a highly modernized version including electronics improvements and so on, the US military found that it faced a new threat during the occupation from 2004 onwards, namely in close-quarters urban situations with weapons such as mines and hand-held weapons. Tank Urban Survival Kits (TUSK) were developed to counter such threats, and the original TUSK I added block-shaped reactive armor to the tank sides as well as an anti-mine underplate, additional M2 heavy machine gun above the main gun, and shields for the loader. The TUSK II upgrade further added shields for the commander and the distinctive tile-shaped reactive armor, although these were not fitted to all M1A2 SEPs.

From the tile-shaped reactive armor to the M2 heavy machine gun above the main gun, the model captures the tank's powerful form.

Complex shields on top of the turret are recreated with transparent parts.

Latest M1A2 hull features such as battery panel on top of engine room are included. The front draw-bar mirrors that on the rear tank.

Parts recreate the "belly-armor"Â that provided protection from mines and improvised explosive devices.

Includes 2 commander & loader figures wearing body armor and in realistic pose. This is a 1/35 scale assembly kit model of the M1A2 SEP Abrams tank with the TUSK II urban survival kit.
Length 280mm, Width 127mm.
The model replicates the tank's imposing form including unique tile-shaped reactive armor, commander and loader shields and M2 machine gun on the main gun.
Model can be made to feature defensively-upgraded TUSK II or TUSK I systems.
Complex reactive armor is constructed with few parts and little fuss.
Includes commander and loader figures (total 2).
Comes with TUSK I and 2 types of TUSK II markings.